Supporting green energy will cost the Czech Republic a trillion Czech koruna; two thirds of that sum will go to photovoltaics operators


The Supreme Audit Office scrutinised how the state provided finances to support energy production from renewables. Financial support for installations producing electricity from biomass, wind, water, solar radiation and biogas will remain an extreme burden on the Czech economy for a long time to come. The SAO’s estimate is that the total costs of the supported sources of electricity will exceed a trillion Czech koruna by 2030. The cost was almost CZK 157 billion in the years 2011 to 2014 alone. A significant portion of that sum will be paid by consumers as a surcharge on the electricity they consume.

The main cause of the large burden on the economy is the provision of blanket funding for all installations producing electricity from renewables. Most of this support went to photovoltaic power stations, which rank among the most expensive of these installations. In 2013, for example, support for green electricity totalled CZK 44 billion, with photovoltaics taking two thirds of that sum even though they only produced 22% of the green electricity. The total costs for the state will be even higher, because operators of “green” power station are entitled to tax relief. It is not clear how much this tax support will come to, because the Ministry of Industry and Trade does not monitor it.

The turning point was the start of 2011, when operating aid for newly built installations began to fall. The endeavour to complete the construction of photovoltaic installations under the old, more advantageous conditions culminated at the end of 2010 with a solar boom. Between 2009 and 2012 the quantity of electricity produced by photovoltaic power stations grew more than twenty-threefold, a development unlike anything witnessed in other EU member states.

Blanket support for installations completed after 2013 has currently been suspended, but power stations built earlier still enjoy the conditions put in place when they went online. The state will continue to pay this support for a further 20 or 30 years, depending on the type of renewable energy. As the support is index-linked by law, the costs will increase every year.

In 2013 the new act on the promotion of renewable sources of energy came into force. Even though the Czech Republic was supposed to present it to the European Commission for approval before it took force, the Commission only received it subsequently. Among other things, the European Commission stated that the support system put in place by the government puts Czech green electricity producers at an advantage over other businesses in the sector. The Commission therefore ordered that importers of green electricity from the entire EU must receive support as well. In 2014 alone this compensation may reach CZK 2.5 billion. 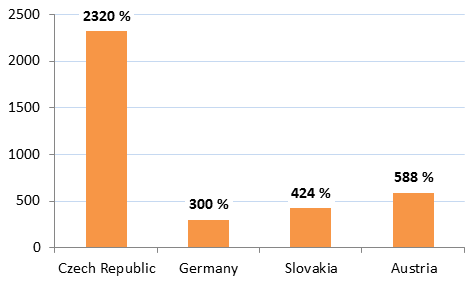