Industrial research: outcomes from five out of eight audited projects not put into practice, problems found with other projects as well


The Supreme Audit Office (SAO) audited industrial research projects, which were managed by Technology Agency of the Czech Republic in the period from 2011 to 2014. Auditors selected and scrutinized 35 projects, which were granted CZK 425 million in total. The SAO was not allowed to scrutinize around half of the amount (CZK 217 million) as the SAO’s powers are limited by the law.

Only eight out of 35 audited projects had been completed when the audit was performed. Auditors revealed that with five finished projects outcomes were not put into practice, with one implemented project outcomes were only partially put into practice and with two projects, practical utilisation of outcomes had been delayed. The Technology Agency was aware of these facts and had an analysis done to monitor 378 plans aimed at putting projects’ outcomes into practice. The analysis reads that „in many cases, the expected and actual benefits differed significantly from the projects’ expenses“, and individual projects’ outcomes correspond with the sentence as nearly half of the results (255 cases) are articles and publications. The results also included 50 utility models and 52 functional samples, nine individual patents, industrial designs, and prototypes (see the graph below).

Auditors focused on the question why research outcomes were only rarely transferred in practice. Auditors revealed several risk areas, namely in the projects’ evaluation and approval processes and the fact that the Technology Agency did not consistently require beneficiaries to comply with the provision rules. Such errors significantly impacted the applied-research’s effectiveness.

Errors were revealed in the project selection processes as well. In some cases, members of consultative bodies had personal connections with institutions that had applied for the grants. These applicants were able to obtain information, which might advantage them over others. The SAO concluded that in many occasions, the evaluation processes were non-transparent as the top consulting bodies who were responsible for the selection of projects increased marks with some projects without giving reasons. As a result, 17 out of the granted projects that had originally been disapproved by rapporteurs and opponents received the grants in the end.

The Technology Agency did not impose the pre-set conditions with some granted projects. For example, beneficiaries were not obliged to conclude agreements concerning the practical uses of the projects’ outcomes in advance. Instead, it was sufficient to submit a declaration of honour, which stated that the beneficiaries did not possess any commercially usable outcomes upon completion of the projects and that agreements on utilisation of the outcomes would be concluded afterwards. Such action is against the law and further disables practical application of research outcomes.

Similar errors in the area of applied research were also found by the European Court of Auditors (ECA), which published a report in April 2016. In the report, the ECA stressed out that the aid to innovation in the European Union poorly targeted market prospects, the outcomes were not commercially used, and the distribution of the support is not transparent.

In the Czech Republic, expenditures for the support to applied research corresponded with the European average. However, the innovation capacity in the Czech Republic lagged behind the average in the European Union. The Technology Agency had an analysis done, which compared its operation to similar agencies in the EU countries, where the innovation capacity is above the EU average. The study stated that the Technology Agency has directly centralised management while in foreign agencies, individual managers are responsible for more activities. The Technology Agency only provides subsidies into applied research, while for example in Austria and in Finland, the agencies grant loans or provide guarantees.

Graph 1 – Results of the audited projects as shown in the PO R&DI informational system. Half of the outputs were publications. 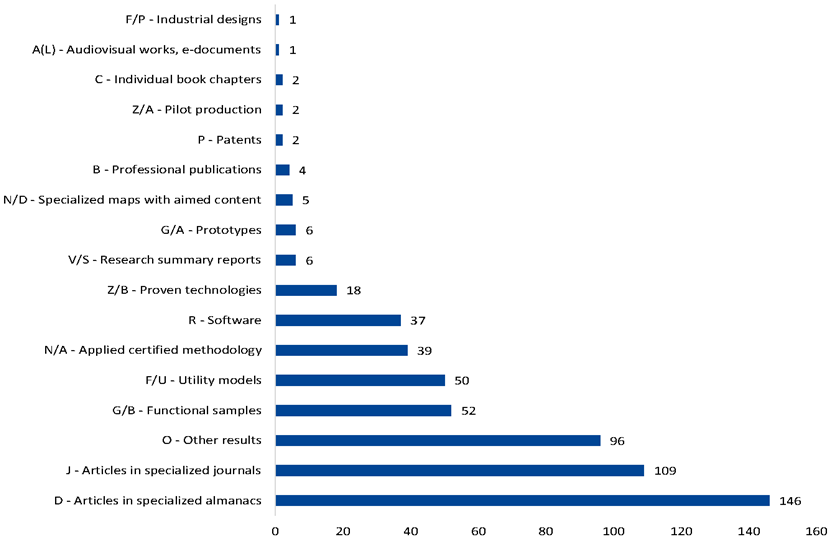